Science is exciting and at no point is this more apparent than when viewed through the eyes of a child, as this fun-filled new publication from Mike Barfield goes to show.

As an impressionable ten-year-old, mere mention of the word ‘science’ had me thinking about dissolving just about anything in huge beakers of acid. With real-world scientific knowledge limited to the realms of mixing salt in water and weird Brainiac-related science abuse involving walking on custard and testing out slippery socks, I just couldn’t wait to get to secondary school and discover what wonders awaited me in the teenage science lab. Who could possibly resist the temptation of flammable alkaline metals, fizzing rainbow-coloured liquids and sooty beakers tarnished by improperly adjusted Bunsen burners?

When I first visited my secondary school, the chemistry teacher set up an experiment to show that the colour of fire could be changed using different types of salt. I’ll never forget adding borax to the soft glow of a Bunsen burner and seeing the flame change to a vivid apple green. The teacher managed to feign delight at what was no doubt the same experiment he’d seen dozens of times already that evening, musing ‘I’d rather like a pair of trousers that colour’ as I happily trotted off for my next lab tour.

What’s the point of this weird childhood anecdote, you may ask? To show that children are impressionable and liable to be amazed by even the simplest feats of science. It’s a good thing, too, because we all know how important it is to get children interested in STEM from an early age. As a parent, older sibling, aunt, uncle or concerned observer, it’s never too soon to get the young Isaac Newtons in your life excited about the wonderful world of science – and what better place to start than in the home.

The good news is that hands-on, kid-friendly science doesn’t have to be limited to the chemicals, crystals and compounds in the average chemistry set. A solution comes in the form of Destroy this Book in the Name of Science, an entertaining new publication from author Mike Barfield, which proves the perfect literary addition to the lab/bedroom of curious children.

Complete with its very own cut-out Einstein mask, this book is filled with projects and tasks to push out and pull apart, with pages reserved for colouring, doodling, cutting, tearing and flat-out destroying – all in the name of science. With the help of a little glue and some determination, even the most fledgling of boffins can discover the physics behinds some exceptional magic tricks, build a working cardboard hoop glider to out-fly any paper aeroplane and race paper sea turtles with the help of just a little washing up liquid.

The comically illustrated book is a simple affordable method of awakening the latent scientist nestled within each young brain. I would recommend this book for adults wanting to engage children in a little scientific fun or, equally, tired editorial staff in need of a Friday afternoon pick-me-up.

This review was first published online for E&T magazine.

“In all my dreams, before my helpless sight, he plunges at me, guttering, choking, drowning.”  ― Wilfred Owen

Line of Fire: Diary of an Unknown Soldier – Barroux 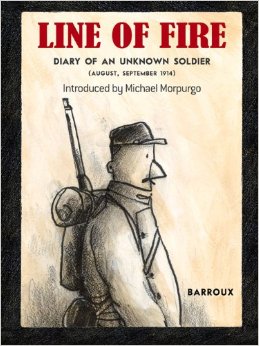 There was never any question of including this book on my tour list. Before I had even received the book I knew that I loved it. Line of Fire: Diary of an Unknown Soldier is exactly what the title implies; the diary of an unknown soldier.

One winter’s morning, Barroux was walking down the streets of Paris when he passed a house which was being emptied of rubbish; piles of old belongings, wrappers and refuse had been placed in the street. ‘We are emptying the basement. Help yourself if you like’ he was told by one of the people ferrying rubbish onto the street. It was at this point that Barroux picked up an ageing yellow diary from amongst the rubbish. A diary which belonged to an unknown soldier serving during world war one. Barroux took the diary and from it created Line of Fire, a graphic novel depicting the words written by an unknown French soldier…may his words never be forgotten.

This book was such a find! I’m over the moon to have discovered it, read it, and to have a copy of my own.

The illustration style fits so perfectly with the subject; you can almost imagine the soldier himself drawing them. They are simple, almost childish, yet graphic, as though they have been scratched with a piece of charcoal salvaged from the embers of long extinguished fire. They remind me, in some ways, of images I have seen drawn by soldiers on the front line. Although the sketches undoubtedly carry Barroux’s distinctive style, there is much in the way of reality present in the scenes. I am reminded of the images in A Soldiers Sketches Under Fire by Harold Harvey – real images sketched by a soldier on the front line.

It feels strange to review the words of a man when I know nothing about him. Although Barroux is listed as the author of the book, the words belong to the Unknown Soldier. They are exactly as they were found, although in the case of my copy they have been translated into English from their native French. They are powerful words, and although it does not take long to read the book, the effect of the story is far reaching and potent.

The Unknown Soldier speaks of the things which are sure to have plagued any man on the front line of WWI. His fatigue, it is crippling, and he feels dead on his feet – ‘My feet are bleeding, My legs can no longer hold me up. This isn’t a man who’s walking but a sheep following the flock.’ He is never able to rest for more than a few hours before being aroused, often in the dead of night, to move on to the next place. He takes to sleeping on piles of straw, where they are available, next to his companion Fernand, sleeping close together for warmth, and, I expect, comfort.

Our Soldier worries about those he has left behind. He is so worried, plagued by worry each time he receives no word from home. It is moving to see the worry from the other side. It is well known that those that are left behind will worry about their father, brother, son, or husband who has gone away to fight, but the soldiers words show that the worry tortures him equally. ‘The women weep. It’s up to us to show that we’re stronger than they are and convince them that we will return.’ When he does hear news his release is evident, as though he has let out a deep breath of relief; ‘at last I receive some postcards from my dear wife’.

The horror of war is also painted on the pages of the diary, not so much in Barroux’s drawings, but in the soldier’s words. The words are not complicated or flowing, but to the point, and powerful – you can smell the gunpowder, hear the crackle of artillery fire, and see the horrors that the Unknown Soldier scrawls within the pages of his diary. ‘This is where a powerful shell landed on a platoon of the 6th company, which was partially destroyed’ he writes, having seen the remains of a soldiers leg hanging from a tree branch.

The Unknown Soldier seems to have made a narrow escape from the horrors of war, although no one knows now anything about the man who kept this diary.  He writes of being injured while forced to advance under the eruption of overhead shrapnel, and of the bravery of a fellow soldier, without whom he may not have survived. ‘While he’s bandaging my arm, the shells continue to rain down on us. I shall never forget the devotion of this soldier who didn’t think twice about risking his life, staying close in order to tend to me.’

Once out of the line of fire, he is faced with a lengthy journey to a hospital, all the while in indescribable pain, and with a raging fever which forbids him rest and sustenance. It is once he arrives at hospital, and his fever begins to subside that he is faced with another, unimagined issue – boredom. For a week we hear nothing of the Unknown Soldier, and then, he writes of his boredom, the slowness of the days, his heavy heart, and his feeling that life is carrying on all the same outside of the hospital walls.

‘Sometimes I’m sorry I didn’t stay in the line of fire’ – and with these words the Unknown Soldier’s story ends.

Line of Fire has left me feeling such a strange mix of emotions, with so many questions running through my mind. The power of the Unknown Soldier’s last words are incredible, and only made more so by the fact that he, undoubtedly, never expected anyone to read his diary. Who was this man? And why did he stop writing? Questions I will find myself often asking, and will never know the answer to.

I would recommend this book to almost anyone. Even if you don’t feel drawn to Barroux’s illustrations the power of the Unknown Soldier’s words will not fail to captivate. History students, WWI fanatics, children and adults alike, this is a lesson in history, and an important one at that. Read it and pass on the recommendation.