“A murderer is less loathsome to us than a spy. The murderer may have acted on a sudden mad impulse; he may be penitent and amend; but a spy is always a spy, night and day, in bed, at table, as he walks abroad; his vileness pervades every moment of his life” ― Honoré de Balzac 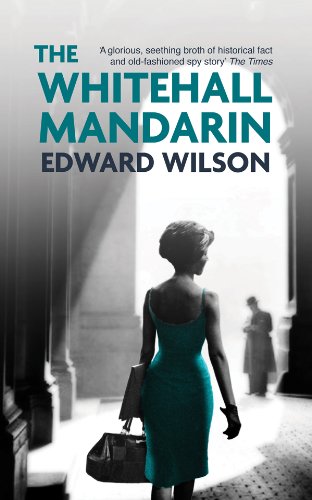 Critically acclaimed author Edward Wilson returns with another seething spy thriller to add to his repertoire. A teeming broth of secrets, sex and scandals, the Whitehall mandarin is sure to be a hit with mystery fanatics and long standing Wilson fans.

Wilson specialises in spy fiction, with a strong focus on the Cold War, and there is no doubt he is a master of his subject. His novels blend seamlessly between fact and fiction, and The Whitehall Mandarin is no exception. The books alludes to a phenomenal amount of research on the part of the author where the smallest plot detail has been unquestioningly scrutinised and researched.  Through Wilson’s novels the reader travels back in time to rub shoulders with the upper classes, and witness firsthand the scandal which occurs behind closed doors.

Edward Wilson hones in on the year 1957, the Cold War is full swing, and British intelligence unit MI6 are investigating a soviet spy ring operating in London. They call upon secret agent William Catesby to keep a close eye on American cultural attaché Jeffers Cauldwell, who is accused of leaking somewhat compromising photograph of British officials to the Russians. The book begins with Catesby, his boss Henry Bone, and MI5 investigator Jim Skardon crammed onto the roof of a building overlooking St James’s Park, London, observing a secret liaison between Cauldwell and an employee of the British Admiralty. The Whitehall Mandarin follows Catesby on his hunt to uncover the truth in an intricately developed web of secrets, a journey which takes him from the scandals of 1960s London to the muggy jungles of Vietnam.

How strange, thought Catesby, that when you look through a telescopic sight and see another human being fixed in the cross-hairs you end up looking at yourself. It doesn’t matter whether it’s the lens reflection or imagination. You try to concentrate on your target but find your eye superimposed over their eyes. Those other eyes, so blissfully unaware of your unblinking predatory stare, are no longer evil. You feel your hate drop away and realise you can’t do it. It was Catesby’s most shameful secret from the war: he had never been able to pull the trigger. But he had learnt to since.

The Whitehall Mandarin is an intricate and multilayered book with a number of interweaving narratives; the plot is complex, and full of twists and turns. This is not the sort of book you can pick up and put down halfway through a chapter – not if you want to stand any chance of keeping up with the plot anyway – but requires considerable concentration on the part of the reader. Let your mind wander for even a second and you could well find yourself having to reread whole chapters.

Wilson portrays the British upper class as a literal hotbed of corruption and sexual scandal. Before reading the novel I will admit to being clueless as to the different between furries and plushies – in fact in all my innocence I’d never heard of either of these things – I’m now something of an expert on the topic. Did you know, for example, that ‘plushies’ are a rather difficult target for ‘honey-trap agents’? In fact, the scandalous things which the upper classes get up to provide the backdrop for the majority of the plot – this is somewhat epitomised by the photograph of a steamy reconstruction of Poussin’s The Triumph of Pan.

The very nature of spy novels makes them incredibly easy to ruin, so I am wary of sharing much more. But to give you a flavour – expect sex, high speed chases, intricate plot lines, and a beautiful English lady who is not quite what she seems.

The Whitehall Mandarin is a page-turning thriller which will leave you desiring more at the end of each chapter. If you are a fan of spy novels then this is undoubtedly the book for you. It is masterfully researched, stunningly written and, most importantly, utterly believable.

I was sent a free copy of The Whitehall Mandarin by the publisher in exchange for an honest review.