“But the thing about remembering is that you don’t forget.” ― Tim O’Brien

What was it I came for? The loaded shelves frown down at me as I circle them, and the blue and white linoleum stares up, dirty and cracked. My basket is empty, but I think I’ve been here for a while; Reg is watching me. I reach for something: it’s heavier that I was expecting and my arm is pulled down suddenly with the weight. It’s a tin of peach slices. That’ll do. I put a few more tins in my basket, tucking its handles into the crook of my arm. The thin metal bars grind against my hip on the way to the counter. 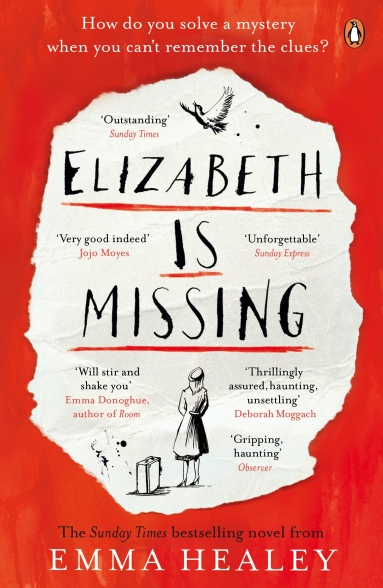 Maud’s memory is not as sharp as it once was. She forgets to turn the gas off, eats endless amounts of toast, makes cup after cup of tea which line up, cooling on the side board, and has enough sliced peaches to feed an army – but still she buys more.

To help her to remember, Maud has a ‘paper memory’ – countless notes left by her carers, her daughter and herself. Notes fill her house, her pockets, and the gaps in her arm chair, instructions, reminders, recipes and phone numbers spill from every orifice. In Maud’s pocket, amongst the shopping lists and appointment slips is a note in Maud’s own handwriting that reads ‘Elizabeth is missing’. Elizabeth is Maud’s friend; the only friend she has left. She doesn’t remember when she wrote the note, but she knows that something is wrong. If only she could tell someone, if she could just make them understand.

Elizabeth is Missing is probably not what you expect. I asked a friend if she knew what the book as about, she looked at me in confusion and said, or asked, ‘some girl called Elizabeth who goes missing?’ – She couldn’t be further from the truth. This book is so much more than just a mystery.

Fifty years ago Maud’s elder sister went missing. In Maud’s mind lie the secrets to solving this mystery, and they are desperate to get out, but it’s difficult to solve a puzzle when you keep forgetting the clues. Maud can’t remember the relevance of her thoughts – there is definitely something important about planting marrows, but she can’t be sure what. She struggles to express herself, forgets the word she was just about to say, answers a questions asked hours before, and relives conversations from years past. It’s no wonder no one takes her seriously.

In Elizabeth is Missing the clues are slowly teased from Maud’s damaged mind. The reader is tossed between the present day, and fifty years in the past, reliving, day by day, the disappearance of Maud’s sister, before returning to the present to search for her ‘missing’ friend. The present is confusing, muddled and foggy, while the past is pristine and bright.

Maud’s memories: her parents’ house, the yard, the pantry, and the dusty bedroom floors – are all so clear and picture perfect. Emma Healey creates a rich, colourful background for Maud, clearer and crisper than the black and white photos of her past. The second Maud casts her mind back it is as though you are there with her in the kitchen, stirring the supper cooking on the stove and preparing the table; focus and you can hear the tinkling of tea into china cups, and the soft clink of the tea spoon.

Return to the present, and the scene is much more blurry.

In Elizabeth is Missing, Healey has taken a theme something that many people are incredibly uncomfortable with, and expressed it in a way that I have never seen before. Watching a loved-one grow old and lose their capacities is one of the most heart wrenching and terrifying experiences I have ever had, and it was incredible to view this from the other side. Elizabeth is Missing allows the reader to take on the role of the person whose mind is failing, to see the world through their eyes. The effect is unsettling, haunting and somewhat humbling.

Maud is an amazing character, she is funny, cleaver and mischievous, but her story is so incredibly sad. If you are an emotional reader, as I am, this one is likely to induce a few tear-filled episodes. There were also times when I felt so angry on behalf of Maud, I was furious with the people around her, those close to her who, it seemed, would ignore her, dismiss her, and neglect her. But of course, the events are portrayed through Maud’s mind, you do not see the other times. The times she has forgotten. It is difficult to describe the emotional rollercoaster that this book took me on – I laughed, I cried, and, in the end, I closed the book feeling completely overwhelmed.

Elizabeth is Missing is one of the most remarkable books I have ever read. Despite the games Healey played with my emotions, I loved every second of it. Each individual aspect of the book combines to create something truly unique and stunning. Even now, weeks after having finished the book I feel completely blown away by the sheer brilliance of it.

Would recommend to anyone and everyone, if you only read one book this year make it Elizabeth is Missing.