More than 100 years after it was first discovered, and following on from decades of research by scientists and theologians alike, author Alexander Jones reveals a new and unknown approach to understanding the mysterious Antikythera mechanism. 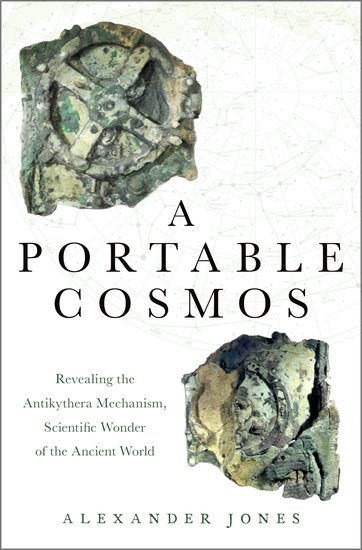 Since the dawn of society, mankind has striven to understand the forces that dictate history. Ancient Greeks found answers in fate, with shrouded white beings, known as the Moirai, depicted alongside the gods as the bringers of destiny.

It would be easy to suggest that fate was at play in 1901, when sponge divers off the coast of a small Greek island stumbled upon the ruins of an ancient shipwreck, which just happened to be one of the most important archaeological discoveries of all time.

The contents of the wreck, dating back as far as 60 AD, revealed untold wonders of the lives of the privileged in Ancient Greece. The vessel was laden with artistic masterpieces in the form of bronze and marble statues and intricate glassware and ceramics. Most important of all, though, was the unique Antikythera mechanism – the crumbling remains of an ancient gear-driven device, since dubbed the first analogue computer.

‘A Portable Cosmos’, written and researched by Professor Alexander Jones, from New York University’s Institute for the Study of the Ancient World, attempts to unpick the murky history of the Antikythera mechanism. The book presents the device as a gateway to the understanding of scientific thought in Ancient Greece, where the divine and the methodical were inextricably entwined.

Jones takes the reader on a journey through the various years of research into the mechanism’s background, as well as into the device itself, affording a glimpse beneath the corroded surface and into the interior gears and cogs.

Since its discovery more than 100 years ago, scholars and scientists have dedicated years of research to uncovering the secrets hidden beneath the mechanism’s corroded exterior. The symbols, writings, gears and cogs uncovered by years of investigation have revealed that the mechanism is some kind of advanced astronomical calculator, with dials given over to tracing cycles of time and the movements of the sun, moon and planets.

Various theories have arisen as to the machine’s true function, with it being labelled as both an astrolabe and a planetarium at various stages throughout the 20th century. It was not until Derek de Solla Price began researching the object in the 1950s that the word ‘computer’ arose and with it the idea that the device could have been used to determine certain predictions and calculations.

For Jones it seems unlikely that the mechanism was created to compute data in any practical way, but rather, was more likely created as a reflection of certain beliefs and aspirations in Ancient Greece. Navigational and other purposes would have been much more easily supplied by other, cheaper means, whereas the range and breadth of information expressed by the mechanism is far and beyond the realms required by any merchant ship.

Instead, Jones poses the idea that the device may have served as vessel for teaching the ‘educated layman’ how astronomical phenomena were interwoven with the natural and social environment. Take a glimpse at Ancient Greek texts and one can see the presence of mechanical thought within the understanding of astrological forces. Vitruvius described the heavens themselves as spun about mechanically – viewing astrological revolutions as driven by a system of invisible, interlocking parts. For some, this theory went further, into the very nature of fate itself.

Within the Antikythera mechanism, each astrological and chronological function had a rich context in Ancient Greek life and as such serves as the perfect gateway to understanding astronomy and scientific technology within society at the time. Just as fate and serendipity fascinated and guided the hands of ancient scholars, so too has it dictated the journey of the Antikythera mechanism, from a corroded piece of rubble to one of the most important discoveries of modern times.