Infinity is all around us. It helped to send man to the moon and underlines the very basic principles of mathematics, but remains a hugely misunderstood concept. 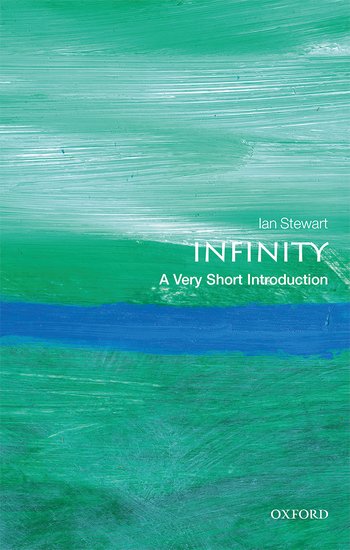 Picture this: I have a hotel and infinite number of rooms, all of which are occupied. If a new guest were to turn up wanting a room for the night, how could I accommodate them? If you don’t already know the answer to this, then the latest release Oxford University Press’ Very Short Introduction series is sure to be of interest. ‘Infinity: A Very Short Introduction’, by Ian Stewart is, somewhat paradoxically, a quick and simple introduction to what is, quite literally, the biggest subject ever. Intrigued? Read on to find out more.

Let’s get back to my hotel and the matter of how I might accommodate this new and troubling guest. If I had a hotel with a finite number of rooms, the poor chap would be out on his ear, but a hotel with an infinite number of rooms is much more flexible. Instead, I simply need to move the guest in room one to room two, and the guest in room two to room three, and so on, so that each guest has been moved from his current room n, to n+1. Once each guest has been moved, room one will be empty and free to accommodate the new guest.

This hotel, hypothesised by German mathematician David Hilbert in 1924, goes to illustrate the counter-intuitive nature of infinity, by showing that infinity plus one, and infinity plus infinity, are both equal to infinity. More than this, though, Hilbert’s infinite hotel paradox highlights that infinity is paradoxical, so don’t be put off by the paradox of a ‘short’ introduction to a huge subject because when you think about it, illogically it starts to make sense.

Unlike infinity itself, infinity as a concept does have a beginning: it was first hypothesised by Anaximander, a pre-Socratic Greek philosopher from around 580BC. He used ideas of infinity, what he called ‘apeiron’, in the search for the origin of life. Since this time, countless philosophers, theologians, psychologists and mathematicians have delved into the black depths of infinity in search of meaning and explanation.

It might seem strange to think so deeply about a concept that we never physically encounter, but infinity actually comes into play in far more situations than you might imagine. Stewart highlights the example of 1/3 expressed as a decimal – 0.33333 recurring. The recurring number of the decimal goes on forever – it is infinite. In the same way, ideas of space and time are often thought of in terms of infinity, as, of course, are numbers. In fact, infinity has an intrinsic role in all manner of subjects – it underlines the very basis of calculus, has taken man to the moon and is used by mathematicians every day.

Infinity is not a thing, it is a concept, a way of understanding tangible things, and, as Stewart goes to highlight, has a very important role to play. The pattern-seeking nature of the human mind dictates that is preferable, or perhaps easier, to think of certain things as infinite than in attempting to think of a boundary. The mere mention of time having a ‘beginning’ will bring up the question of ‘what came before?’. ‘Nothing’ is an incomprehensible answer.

With ‘Infinity: a Very Short introduction’, Stewart has taken an interminably complex subject, and condensed and contracted it to something reasonably manageable – just reasonably, mind, not entirely, as this is infinity we are talking about. The book introduces puzzles and paradoxes, debunks common misconceptions and explores infinity as a concept in both the natural and theoretical world. The sheer wealth of information is at once fascinating and a little terrifying.

If you’ve ever been struck by the question of what lies at the end of infinity, are baffled by the idea of never ending time or space, or just want to read something that is bound to twist your mind in crazy directions, then this is the book for you.