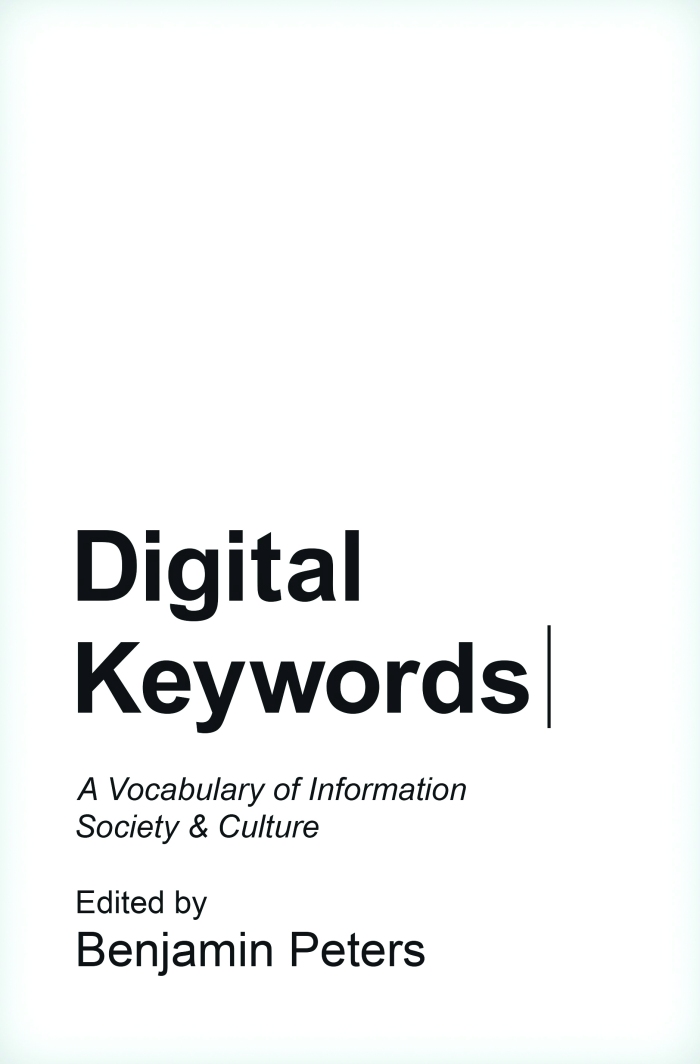 In 1976, Raymond Williams published his world-renowned reference book Keywords: A Vocabulary of Culture and Society, a text that would go on to change the way society approaches language, and make its way onto the reference shelf of political theorists, linguists, university students and academics alike. The text revealed how the meanings of 131 words were formed, altered and redefined within the changing society in which they were used.

Now, 40 years after Williams began the journey into the politics and culture behind language, his work has been continued – and readapted for the 21st century – in a book that seeks to carry on where he left off, by digging out the roots of digital language and discovering how it has shaped the newfound society we live in today.

Digital Keywords: A Vocabulary of Information Society & Culture takes 25 of the most important ‘digital’ words in the English language and assesses how their meanings have shifted over time, analysing the forces behind them, their meanings and their development. With essays from contributors across the fields of politics, communication, media and digital activism, the book seeks to discover how the digital has reconfigured culture, and how the development of keywords reflects cultural change, hinting at development and marking even the subtlest of societal revolutions.

In his introduction, Peters points to the words of technological historian Leo Marx: “The emergence of a keyword in public discourse – whether newly coined or an old word invested with new meaning – may prove to be an illuminating historical event. Such keywords often serve as markers, or chronological signposts, of subtle, virtually unremarked, yet ultimately far-reaching changes in culture and society.” These are the keywords that Peters attempts to uncover in this new and revolutionary publication – the words which, once studied, reveal a deeper meaning about society than the actual definition alludes to.

What a keyword does, says Peters, is both more relevant and more interesting than what it is. In this way, it is important to understand that Digital Keywords is much more than a concise dictionary or glossary of digital terms. The very meaning of the keyword itself takes second place to the history and development of the word, the society that gave way to its development, and its continually changing definition. In addressing ‘activism’ for example, in the first essay in this collection, contributing author Guobin Yang must take into account, not just activism in its original sense, but the rise of digital activism, and the words and movements that this form of activism gave way to by delving into online activism, cyber activism and hacktivism alike.

The one annoying thing about this text is that you cannot say it runs from A-Z as books of this nature often do, as Peters’ digital list is somewhat limited, assessing only select keywords from Activism to Surrogate. ‘A to S’ doesn’t have quite the same ring to it, does it? But, as the absence of Z suggests, the book itself is only the beginning. Each chapter is cross-referenced to linking keywords, both within the book and within William’s original selection, and there is also an extended appendix of further digital keywords for the reader to consult research themselves. It seems that, with the release of this book, the digital language journey is just getting started.

Digital Keywords serves as an in-depth interrogation of the meaning and development of digitised language, and strives to reveal the way in which the digital has reshaped society and rewritten culture. You can learn a lot about society from language, and those wishing to gain a deeper understanding of the modern, digital world we all inhabit would be well advised to begin by taking a look at this book. Just as Keywords made its way firmly onto reference shelves in the 1970s, so too will Digital Keywords today.

This review was first published in print for E&T magazine.