A few months ago I came into work to see a news story left on my desk. It was inconspicuous, a small sheet of thin paper roughly torn out of a little pamphlet, and it told me they The Little Prince was coming back. The little golden-haired boy whose story opened my eyes to a whole new way of thinking had touched another author enough to be brought back to life.

Then, one evening this October as the weather was just starting to turn, I was walking out from South Kensington tube station when I passed small, independent book shop, lit up against the coming dark with the most wonderful display of hardback books – he had arrived. 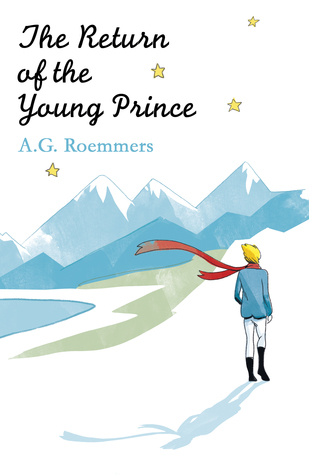 Those of you who have read my blog a lot might know of my love affair with The Little Prince. I love French translations, and this one was so wonderfully magical and childish that it took me back to innocent place in the very far reaches on my memory. The golden-haired boy of Exupery’s tale holds a firm spot in my heart, and the idea of seeing him again filled me with so much joy.

I approached the book with a certain amount of caution, aware that it could so easily fall short of my rather high expectations – The Little Prince is a rather hard act to follow. I’m not going to pretend I didn’t have a few reservations while I was reading the book – there were the invariable comparisons to the original – but while I found it difficult at first after some time I realised that the book needed to be different. After all the original book is not just the story of The Little Prince himself, it is the story of the Aviator – that is, Antoine de Saint-Exupéry – and how his life was touched by The Little Prince. In the same way, The Return of the Young Prince is a tale of how The Little Prince touched A.G. Roemmers.

In The Return of the Young Prince, a solo driver, setting out on an expedition across the mystical land of Patagonia, finds a young, starving teenager asleep at the side of the road – none other than The Little Prince, now grown, who has returned to earth in search of his friend the Aviator. The pair embark upon a journey of a lifetime, the man with a destination in mind, and The Young Prince, as he is now known, hoping that along the way he will find what he is looking for. The Young Prince and the driver speak, they are philosophical, quizzical, educational and at times humorous, the conversations passing between the pair serving to highlight, as in the original, the wonderful difference between the adult and juvenile brain, and that there are things in life that you cannot put a price on.

“I can tell you with certainty that your friend gave you the loveliest sheep in the world – the one that you imagined in your fantasy, the only one you could look after and that could go with you to your little planet. Didn’t you enjoy his company as you watched the sunsets? Didn’t you go to him in the night so that he wouldn’t feel alone and that you too wouldn’t feel so alone? Didn’t you think that he belong to you because you had tames him and that you belonged to him? There’s no doubt that he was more real, more alive, than the one you saw in the photograph, because that one was just a sheep, whereas the one inside the box was your sheep.”

There is so much I could say about this book, so many anecdotes I would love to pick apart and ponder over the hidden metaphors and morals. There are so many messages one could take from the story, though, that it would be unfair of me to do so and to taint your own experience of the book. Assuming of course that you are willing to give the book the time of day – I thoroughly recommend it.