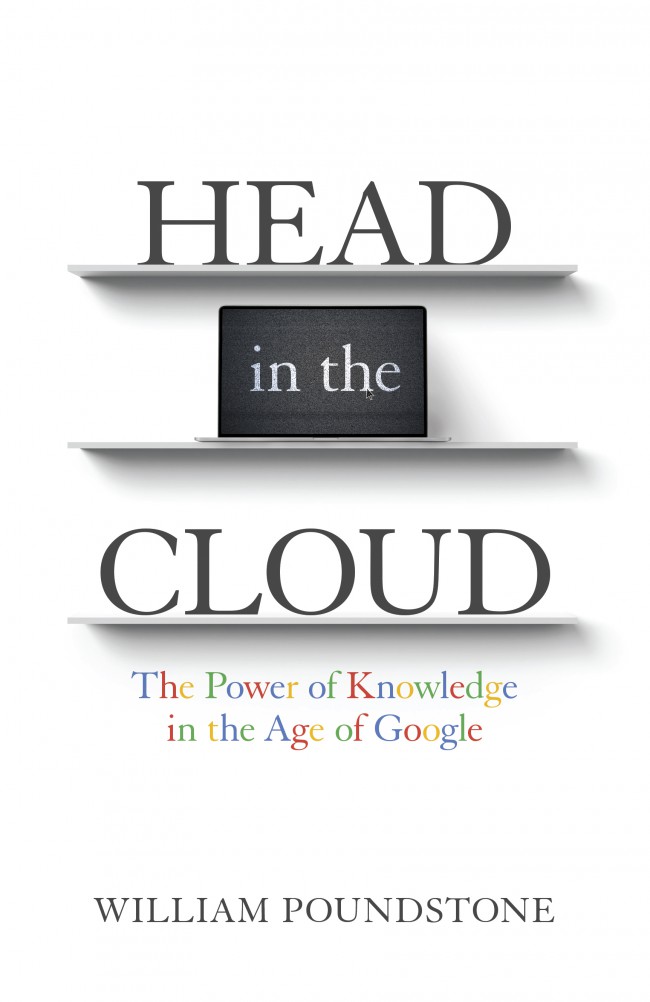 What’s the point in knowing anything when facts are so easy to look up? In this new release from Oneworld Publications, William Poundstone sheds light on the importance of knowledge, even when Google is just a stone’s throw away.

It is often said that we are living in an information age. Gone are the days of trawling through text books and library archives to find the material to complete your latest homework assignment. The internet possesses all the information you could ever need – and then some. Pick up your smartphone or connect to your computer and you have a wealth of data available at your fingertips. But while it’s true that it is incredibly easy to look up facts on Google, it’s not so easy to remember any of them. Some have argued that having such a wealth of information available to us is making us stupid.

In his new book, ‘Head in the Cloud: The Power of Knowledge in the Age of Google’, William Poundstone turns this theory on its head. Being better connected doesn’t necessarily mean we are better informed and the internet is not making us stupid, he argues. Rather, it is making us less aware of what we do not know. We’re living, Poundstone believes, in the golden age of rational ignorance. People are more interested in the lives of Kim Kardashian and Kanye West than bothering to learn who painted the Mona Lisa and millennials use acronyms such as BTDTGTTAWIO (been there, done that, got the t-shirt and wore it out), but are unable to recall the single word uttered by the raven in Edgar Allen Poe’s famed poem.

So what does being well informed actually mean? Does it really matter?

Speak to any self-proclaimed gamer and you will likely tap into a wealth of information that’s missing from the mind of the average Joe. Perhaps you don’t have a clue what processor lurks within your PC, or how to overclock the latest Nvidia graphics card, and why would you? Unless gaming happens to feature high on your list of priorities, you’ll probably never need to know this random information.

Equally, some of you will have got through life just fine without ever having known the catchphrase of Poe’s raven. If someone was to ask you who invented Post-It notes, what year Tinder was developed, or what the fastest land mammal on earth is, you could retrieve the answer from the cloud within a fraction of a section of clicking ‘search’ on Google. This poses the question: ‘What’s the point of knowing anything when facts are so easy to look up?’

Interestingly, it turns out that the benefits of staying well-informed extend much further than being everyone’s go-to teammate in the monthly pub quiz. Poundstone reports results of internet surveys analysing the rate of public knowledge, with outcomes suggesting that better informed individuals are, on the whole, healthier, happier and quite significantly wealthier. Not only this, but factual knowledge is heavily correlated with personality traits, including political opinion. Did you know, for example, that those who are able to locate a country on a map are less likely to be in favour of invading it? This is just the very tip of the iceberg when it comes to ill-informed voters.

‘Head in the Cloud’ is hilarious, humbling and brutally honest, and will likely make you doubt yourself, and everyone around you. This book is not merely a declaration of the woes of an ill-informed public, it also serves to highlight the benefits of broadening your horizons, offering insight and advice on how to best use todays media to stay informed. If you take only one thing away from this book, let it be the knowledge that there is no such thing as irrelevant information and that you could probably benefit from a little more time spent with an atlas, encyclopaedia and Oxford English Dictionary.

This review was first published in print for E&T magazine