After being treated to these beautiful books by a good friend I spent an otherwise dismal weekend holed up in my new reading room indulging my inner child.

The Sleeper and the Spindle – Neil Gaiman, with illustrations by Chris Riddel

High in a tower in a kingdom far, far away a beautiful princess lies enchanted in her bed. Lately, the spell which keeps her slumbering has begun to spread, and the people of neighbouring villages have fallen victim to the sickness. Many brave souls have tried to reach the tower in the hopes of breaking the enchantment only to lose their lives, impaled on an impenetrable fortress of rose thorns. On what is to be the eve of her wedding, a young queen decides to set aside her matrimonial plans to rescue the sleeping princess. Accompanied by a team of crass dwarves, the queen takes up her sword and chain mail and travels deep into the mountains to reach the sleeping kingdom.

The Sleeper and the Spindle combines the traditional themes we all know and love with an exciting modern twist, to create an enchanting, yet ominous tale – as delicately unsettling as it is deliciously captivating.

Oh and the illustrations are nothing short of spectacular.

If you saw my post about Children’s Stories from Japanese Fairy Tales and Legends you’ll no doubt be familiar with my fascination with foreign fairy tales. In fact, this interest does not apply just to fairy tales – myths, legends and ghost stories are also high up my list of interests. I find it really interesting to see how stories from different nations compare to those I grew up with and know so well.

This collection of tales was written, or rather, recorded by renowned Russian folklorist Alexander Nikolayevich Afanasyev in the mid-19th century. The book contains some of the best-known Russian folktales, including: Vasilisa the Beautiful; The Feather of Finist the Falcon; The Frog-Tsarevna; and Tsarevich Ivan, the Firebird and the Grey Wolf.

Of all the characters I came across in this volume, and there are a few who feature in more than one tale, I was particularly taken by Baba Yaga.

Baba Yaga is a cannibalistic witch who lives in a small wooden hut at the edge of the forest. Now, this description may not seem so different from a lot of other witches in children’s stories, but Baba Yaga has so many fantastic quirks, the likes of which I would never have imagined.  Her hut stands on hen’s legs, and will only lower itself to permit entry when in receipt of a certain rhyme. It is also surrounded by a picket fence adorned with the skulls of Baba Yaga’s victims, the eye sockets of which glow in the night.  Instead of a broomstick, Baba Yaga travels through the forest in a giant mortar, driving herself forward with a pestle in her right hand, while sweeping the forest floor with a broom in her left hand. Oh and she is also often followed by spirits.

Having no familiarity with Russian folklore prior to this, I feel the collection gave a good introduction to some of the most famous characters in Russian folk literature. It’s a beautiful volume, and some of the illustrations are so elaborate I feel I could have spent hours studying them. 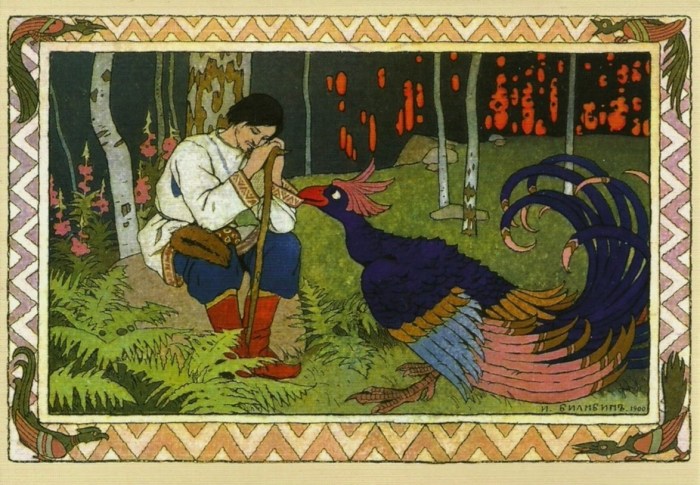 4 thoughts on “A fairytale weekend”