With Nasa’s new lander, InSight, due to launch in 2018, and the Mars 2020 Rover set to touch down just two years later, all eyes are on Mars. Rod Pyle traces the history of the Red Planet in this stunning new publication from Carlton Publishing Group. 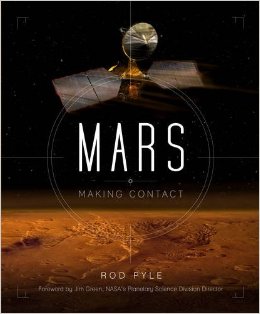 The universe can be a pretty lonely place. What are we but a pale blue dot, orbiting an insignificant star, in one of any number of solar systems, in an unquantifiable amount of galaxies that make up the universe? For generations humankind has hoped to one day discover life beyond our world, to finally know that we are not alone in the universe. Of all the planets in our solar system, there is one which will forever encapsulate the human desire to discover alien life, that dull red dot flickering in the distant night’s sky – Mars, our, not-so-identical, twin sister.

For millennia, Mars has held a special place in the human psyche, fascinating explorers enamoured by its dull red appearance and unusual celestial motions across the night sky. In the past, the relative closeness of the Mars to our own home seemed to hold the promise of hardy plants, animals equipped to handle long cold winters, and a whole new world of secrets and history. Over the years, however, we’ve come to learn quite a lot about our distant neighbour, and the truth is far from appealing.

Multiple flybys, orbiters and landers throughout the years have awarded us a deeper understanding of our sister planet, and opened our eyes to the truth of that which once lay just beyond our grasps. The first fleeting images of Mars, awarded by the success of the Mariner 4 flyby, revealed a hostile frozen desert – similar to Earth in terms of geology and physics, but cold, dry and lacking in any kind of atmosphere that would allow for the development of life.

Mars: Making Contact traces the history of Mars here on Earth, as the lonely red sphere in the night’s sky evolved from an otherworld entity, to a place, and as the secrets of Mars continue to unfold. Author Rod Pyle reveals the many human interactions that have occurred with our sister planet, and lays out the hope of more to come, as we move towards the first human mission to the hostile red sands of Mars.

This review was first published on online for E&T magazine