Skip to content
Home“Your worst enemy, he reflected, was your nervous system. At any moment the tension inside you was liable to translate itself into some visible symptom.” ― George Orwell 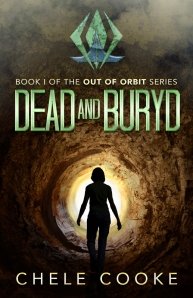 Chele Cooke recalls always having books around her while growing up, but she truly realised her love of reading as a teenager, when she discovered the Harry Potter books. Her taste in books is varied, having grown from her initial interest in fantasy – ‘I’ll give anything a try at least once,’ she tells me. Cooke began writing through play-by-post role plays, which she says was akin to ‘learning to walk before I ran’, and being able to submerge herself in another world helped with her own writing. This, coupled with a degree in creative writing, was the catalyst that launched her career as an author. Dead and Buryd, was released in 2013.

Dead and Buryd takes place on an alien planet plagued by harsh seasons; searing hot summers that give way to inhospitable, freezing winters. The planet’s natives, the Veniche have found themselves the effective slaves of their technologically advanced invaders, the Adveni. Any Veniche who steps out of line is liable for incarceration within the walls of the Adveni’s impenetrable prison, Lyndbury.

Cooke introduces the reader to Georgianna Lennox, a local medic, who works alongside the Adveni forces, treating those injured within the walls of the prison as a way of serving her lost people. When Georgianna’s friendship with a group of rebels – the Belsa – risks putting her own freedom at stake, she is faced with a difficult decision – what will she choose to put first, her family or the freedom of her people?

The first two chapters of the book form a sort of prologue to the story, setting the scene and introducing us to characters that come into play later on in the novel. This introduction to the novel works really well, serving to spark questions in the reader’s mind and piquing their curiosity. The history of the planet and the natives is quickly skimmed over in these opening chapters, and is elaborated upon at points throughout the novel. Through this gradual method of unravelling, Cooke lets the history of her world develop in the reader’s imagination, revealing little snippets of the story piece by piece.

The novel’s setting, an unfamiliar planet occupied by inhuman, almost robotic invaders, really appealed to me. Not only was the way in which Cooke portrays the setting particularly masterful – her descriptions allow your mind’s eye to create an almost perfect picture – but the harsh summers and harsher winters made me think of an exaggerated version of our own world. It almost seemed plausible to me that Cooke’s dystopia could be a future version of Earth, a world where the natural environment has been irreversibly damaged to such an extent that people are forced to live in tunnels to escape the searing heat, unable to spend even a short amount of time in the sun, in the heat of the day without fear of burning. Needless to say I was intrigued enough by the book from the onset that I didn’t want to put it down.

There are several central themes running through the novel, the most important of which is love. Love emerges in Cooke’s work in many different ways, but ultimately, there is a love which is central to the Veniche’s existence that the Adveni seem incapable of feeling. The Veniche are described as a very sentimental people – they have a strong allegiance to their kind, their tribes and ultimately their family. Georgianna herself works alongside the Adveni so that she can treat those of her people who are trapped away from the ones they love. Above and beyond this allegiance, is the love the Veniche develop for the one person they choose to ‘join’ themselves with. Being joined is described as something very final, which you can never distance yourself from. The topic is first approached in reference to a relationship between Georgianna’s brother and the man to whom he was joined. Georgianna first learns what it means to love by witnessing the love the two men share:

‘Watching her brother with Nequiel, However, she quickly learned that it wasn’t about finding someone suitable to join with, someone you could live with. It was about joining with the person you couldn’t live without.’

It is as though each Veniche is only one half of a person, and there is another half without which they cannot become whole. This is evident in the way loss is described:

‘Her brother was no longer the same person she had grown up with. He was quieter, more reserved, and less willing to talk about anything important.’

The Adveni, on the other hand, are clinical in the very sense of the word. Cooke creates an army of invaders akin to the Nazi’s Master Race. The allegiance that the Adveni have to their group goes beyond the heartfelt commitment of the Veniche; they have an ingrained herd mentality, going about their lives in favour of the greater good.

‘Unlike the Veniche, who paired most commonly for love, the Adveni were put to numerous tests. If their tletonise – the Adveni way of referring to what the Veniche people knew to be the aspects of a person passed on to their children – did not pass these tests, they were forbidden from creating offspring.’

The Adveni mating ritual is an example of survival of the fittest at its most horrifying – a greater force deliberately manipulating breeding patterns to create an indestructible army. Tactics frighteningly similar to those used by the Nazi’s during World War II. The Adveni do not have that one person who they feel they cannot live without; rather, they are matched up with the person best suited to their genetic makeup. For the Adveni, love exists only for the greater collective good.

A lack of love for one another is just a slight crack in the hard exterior that is the Adveni forces. They are feared and hated by the Veniche. The title of the novel alludes to this; the Veniche used the phrase ‘buryd alive’ to describe those taken captive by the Adveni, alive in almost every sense of the word, but unable to escape: ‘Though your life was over and there was no escape, your body remained alive.’

I love the way Cooke expresses Georgianna’s fear of the prison and the Adveni guards. While she tries to keep on the good side of the guards, she is always terrified of what may happen when the doors of the compound close behind her. Her fear is, understandably, multiplied when she has reason to be afraid:

‘If she showed up acting suspiciously, they’d know for certain that something was going on. The problem was, the harder she tried to think about other things, the more the plan filtered into her mind. As she walked, her only salvation became that the Adveni had no mind-reading technology, at least not that she knew of.’

This passage really stood out to me as a perfect portrayal of the reasoning everyone goes through when trying to behave casually in a risky situation. It’s a feeling so many people will be familiar with, as though your mind is playing tricks on you, feeding you morsels of hope before making you doubt yourself.

I found Georgianna to be, on the whole, an incredibly genuine and relatable character. In Georgianna, Cooke has created a fantastically well-rounded vessel to convey her story. The reader learns about the planet, the people, and the struggle almost exclusively through Georgianna, but they also get to know the heroine on a very personal level. In time it becomes apparent just how normal Georgianna is. Despite her situation, her allegiance with the rebels, the things that she does, and even the fact that she is from another world, there is an aspect of her personality that a lot of people can relate to.

The most obvious demonstration of Georgianna’s real character comes out in her feelings about Keiran. Georgianna has fallen foul to one of those complicated casual relationships, which I’m sure many people are familiar with. The way that she justifies the relationship to herself is so transparent. She begins by suggesting that she is fine with the way things are, but she always comes back to mentioning that she knows Keiran is with other women, and that she’s fine with it [I’m fine! Who else is fine?]. As time goes on, and Keiran’s comings and goings continue to plague Georgianna’s thoughts, it becomes apparent that she is not so cool with it after all:

‘Weird was hardly the word she’d give to it. She’d maybe been a little more emotional, but seeing as Keiran has his wonderful reputation with women, surely this wasn’t the first time a girl had realised she wasn’t happy keeping their relationship at just sex.’

When Georgianna realises she might want more from the relationship, she cannot keep the sarcasm out of her thoughts – Keiran has a wonderful reputation with women. However, she still attempts to appear reserved, as though she does not want to show her true self for fear of being hurt:

‘Finally looking up at him, she shrugged a little. Clasping her hands tightly in her lap, trying to stop herself from fidgeting, she found herself drumming her fingers nervously against the backs of her hands.’

Georgianna really is just so likeable and funny, despite her hard exterior. Forming a relationship with the heroine of the story like this really added to my enjoyment of the novel.

Overall, I thoroughly enjoyed reading Cooke’s work. The story has some fantastic plot twists and enough unanswered questions to have me eagerly anticipating the next in the series. Cooke’s writing style is smooth and fluid, maintaining a unity throughout the flow of the story. I am not an enormous Sci-Fi reader, and I can be easily put off by the random and incessant introduction of unnecessarily complicated devices, but I found Cooke to be very accessible. While new terminology is introduced to the reader, it is done so easily, and with explanation, so as to avoid over complication. Dead and Buryd gets a resounding ‘would recommend’ from me.

I am thankful to Chele Cooke for providing me with a free review copy of her work, and introducing me to the Out of Orbit series.

One thought on ““Your worst enemy, he reflected, was your nervous system. At any moment the tension inside you was liable to translate itself into some visible symptom.” ― George Orwell”