Skip to content
Home“We went down into the silent garden. Dawn is the time when nothing breathes, the hour of silence. Everything is transfixed, only the light moves.” ― Leonora Carrington 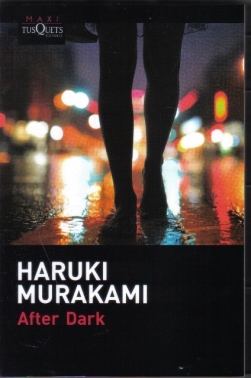 Set in the witching hours between midnight and sunrise, Murakami explores encounters throughout Tokyo during this silent time. At the centre of the story lies Mari Asai, a young college student sat quietly reading and smoking in a 24 hour Denny’s, her sister Eri Asai a fashion model has been mysteriously sleeping for two months. Mari is troubled by the distance between herself and her sister, physically and emotionally, and is choosing to stay away from home. Mari is drawn out of her night time sanctuary and into the lives of the people who frequent Tokyo at night, Takahashi a jazz trombonist who takes an interest in Mari, insisting that they’ve met before, Kaoru the rugged female manager of a japanese “love hotel”, and a Chinese prostitute savagely beaten by a night-shift businessman.

Murakumi follows Mari and her counterparts, drifting through the city like ghosts. Mari learns about the lives of all whom she encounters, Takahashi, Kaoru, the love hotel staff, and the prostitute.

Marukumi also traces the evening of the mysterious businessman who attacked the Chinese prostitute – Shirakawa. Working late in the office of his company ‘veritech’,  Sharakawa seems plagued by what he has done, what he ‘had to do’, and the thought of returning home to his family. On occasions he comes dangerously close to the furious ‘owners’ of the prostitute, literally within an inch of his life.

On several occasions the reader enters the room of the sleeping Eri Asai, who is sleeping ‘so very’ deeply, in the room ‘we’ adopt the view of what seems like a security camera, and are given strict rules to adhere to, ‘we can only watch’, although it is not apparent where exactly these rules come from. Slowly it becomes apparent that the TV in the room is on, and a man in a silicone mask inside the screen is watching Eri, Eri is transported in her sleeping state, awakening inside the TV. On the floor she finds a pencil with the word ‘veritech’ inscribed on the side, we are made to believe that Eri’s sleeping state is somehow, mysteriously linked to the businessman. By the end of the novel Eri has left the TV and is inside her room, sleeping once again.

The story is obscure, and extraordinary, on two occasions character stand and look in the mirror, only to leave their reflections behind when they walk away.

I can’t pretend to have fully understood what Marukumi was trying to express when he wrote this book, I imagine Marukumi to be the type of author who is never fully understood by anyone. His style of writing seems very abstract. I am tempted to have a look at more of his work in the hope of understanding it better.

The writing style is difficult to get on board with at first [partly, I assume, due to having been translated from Japanese], but once I got past the first chapter or so I found I had happily adjusted. The detail more than makes up for any difficulties with style. The reader often takes the position of some kind of security camera, and everything is taken in, Eri’s eyelashes as she sleeps, the glass of beer in the love hotel, Shirakawa’s pencil, the reader sees them all. For me the description seemed to go beyond the level you would normally see with your eyes. The best way I can find to describe it is like audio descriptions for the visually impaired on a DVD.

Overall while I don’t proclaim to have discovered Marukumi’s message behind this book, I definitely think it is worth a read, and I will seriously consider looking further into his work.

5 thoughts on ““We went down into the silent garden. Dawn is the time when nothing breathes, the hour of silence. Everything is transfixed, only the light moves.” ― Leonora Carrington”