Skip to content
Home“The ignorance of the oppressed is strength for the oppressor.” — A. R. Bernard

Sonya Writes lives in North Carolina with her two daughters. A quick look at her website reveals she has a love of all things literary, Writes is an author, book reviewer, and non-fiction fanatic – so no stranger to the world of words. Writes’ novels delve into the obscure, exploring the results of slight changes to traditional plots and include a series of ‘fairy tales retold’. ‘In most cases, the plots to my books were started with a simple question,’ she says, reeling off the questions that led her to publish her first few novels. ‘I’ll continue to ask many more as my writing career goes on.’ As well as an impressive collection of novels, Writes also has a series of books designed for children. Her first full novel, First to Dance, was published in 2014.

Zozeis is a dismal planet, with a society so oppressive it seems to bleach the bleak streets that streak its surface. On such a place there is no room for individuality. Children are moulded into their positions, plucked from school and assigned to their lifelong roles. To see the children in their classrooms you may think them all the same, as they sit absorbing knowledge, with no opportunities to learn through exploration. On Zozeis the written word is fact, and ‘they’ decide which facts are learned. Any kind of creativity is shunned, not banned as such, but certainly not considered as acceptable.

An insatiable appetite to learn draws 19-year-old Ayita behind the panels of her dusty garage, into a long hidden library whose books tell of a planet where creativity is nurtured, beauty is immortalised through paint and stunning ‘lies’ coat the pages of books – Earth. Ayita dares to dream that such a place exists. Exploring her own rebellion, she paints the walls of her bedroom with flowers, and dances alone in the dark. When she is discovered Ayita has no choice but to flee her home, in the hope of finding earth, and freedom not just for herself, but for all the people of Zozeis.

The opening lines of a book can be the most important; it is your chance to capture a reader’s attention – while many people are encouraged now to look beyond a book’s cover, they may not look past the first few lines if what is inside fails to captivate. Luckily Writes did not disappoint:

‘Don’t try to teach Aaron about Earth, Etana. I forbid it.’
‘I didn’t know that I married a dictator.’
‘If you teach him about Earth, you’ll lose him, not because I am a dictator but because that is what the people have decided.’

These few lines precede the opening chapter, and introduce a small, yet important part of the history of Zozeis –my interest was immediately piqued. The chapter that follows introduces Ayita, mid argument with a school friend. It emerges that Ayita has discovered a book that talks about Earth – her friend is not impressed.

Having only read the first page of First to Dance, there are already so many questions buzzing around in the reader’s head. What is this planet? How did these people get here? And who is Etana? What happened to Earth? The only possible way to find the answer to these questions is to read on. 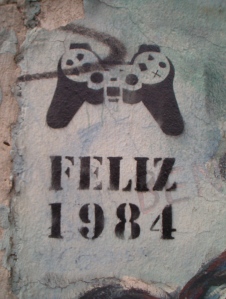 Zozeis is a George Orwell-esque society; imagine 1984 crossed with the world portrayed in Ricky Gervais’ The Invention of Lying. Earth, the place it seems the people of Zozeis originated, is like a huge conspiracy, covered up and left out of text books. Zozeis is everything, and within Zozeis everything is regimented – jobs, love, and schooling are all predetermined and rigid:

‘After dropping out, students were assigned a job, and when they were old enough, a spouse and home according to their job district. Five or six years ago, dropping out for Ayita would have meant working in the fields or delivering the weekly grocery boxes to each household. Now it would mean a hands-on internship leading to a more high-profile and envied position in a wealth district, such as where she lived now. If she made it through the next three years in class she could eventually receive a top position in government or be on the committee that decided which facts were taught to people and when.’

Should a person toe the line of what is considered normality, they risk being sent to the dreaded ‘secondary school’. The secondary school is a domineering building, shrouded in mystery, where citizens are sent to learn the ‘truth’ so that they might come back into society – though some who enter are never seen again.

It takes some time for the whole story of Zozeis and its people to come into the light, and Writes opts to introduce this information in a slightly different way. Part way through the book there is a section in which the narrator assumes the voice of one of the founding members of Zozeis, Etana, and it is through this section that we learn the history of Zozeis. Writes’ decision to introduce the information in this way may not be to everyone’s taste – it could seem slightly jarring to have the tense switch like this. I personally thought it worked quite well, although perhaps it could be more carefully slotted in, allowing for time to pass between the present and the past so as to make the section a little less intimidating. I will leave it to other readers to judge for themselves.

Through this section of the book we learn that Zozeis, and many other planets, began as a series of experiments conducted by an eccentric billionaire Dr Timothy Azias. It sounds horrific doesn’t it? Imagine Dr Timothy as a futuristic combination of John Cleese’s character in the film Rat Race and Jeffrey Combs’ in Would you Rather? And yet somehow, at times, I felt something close to compassion for Dr Timothy, despite the fact that he essentially kidnapped thousands of people to satisfy his own morbid curiosity. I can imagine this reaction to be somewhat similar to what Etana herself would have felt. I’m not sure how Writes intended for the reader to feel towards Dr Timothy, his character is left very much open ended and I have a feeling there is much more to learn about him.

I’d love to talk some more about the other planets that come into play in First to Dance, but I am, as always, wary of spoilers and do not want to give too much away. What I will say is Ayita does visit other planets in the book, and that the question on Writes’ mind that led her to write First to Dance was ‘What if everyone shared the same personality type?’ and leave it at that.

There was one aspect of First to Dance that I found really quite troubling, and that was the lack of animals on any of the planets. I found this especially problematic given that there seemed to be an abundance of plant life. For me, this part of the book didn’t really work. I can’t quite comprehend how such places could exist without creatures of some sort to sustain the ecosystem. Of course, given that it is a work of fiction, Writes has poetic licence over such matters, but I think if this is to be the approach of the book then some sort of explanation is needed.

On the whole, I found First to Dance to be a thoroughly entertaining read. Writes’ questioning nature has created a great backstory that gives way to an equally brilliant storyline. I do think that there are a few structural things that could do with being improved, and that the text would benefit from being seen by a professional editor, but I don’t feel that these issues are great enough to warrant any kind of despair on behalf of the author. Overall I really enjoyed the book, and would be very interested to see whether Writes will decide to continue the series.

Many thanks to Sonya Writes for supplying a free copy of First to Dance in exchange for an honest review.