‘Some day you will be old enough to start reading fairy tales again.’  ― C.S. Lewis

Welcome to the first installment of my children’s books for adults tour. I’m sure you’ll agree there’s no better book to feature first than a good old fashioned fairy tale. 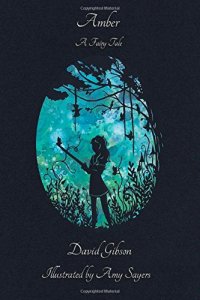 ‘The Wandering Woods were vast and unimaginable in size. A canopy of ever changing shades of green stretched from the mountains of the cold north to the great river that wound its way far to the south. Trees, strong and proud, stood branch to bark with those that were old and gnarled, covering the land from the ocean in the distant west to disappear into the hazy depths of the fairy mists to the east.’

Amber: A Fairy Tale is the first part of The Wandering Woods series by David Gibson, and was published in November 2014 by Rowanvale Books. Gibson began writing The Wandering Woods series while studying for a degree in English and Creative Writing at Glyndwr University, Wrexham. He originally began The Wandering Woods as bedtime stories for his two young children, drawing inspiration from his daughter’s personality to develop the character of Amber; a character based on his son is due to feature heavily in one of the upcoming instalments in the series.

Amber is the enchanting tale of a young girl who lives with her mother, the good witch Blossom, in a small house within the sprawling realms of the wandering woods. Amber is a carefree child, first introduced doing battle with an old scarecrow in the quaint garden of her home, carelessly humming along to the tune of a passing finch. All this changes when her mother is suddenly taken ill and Amber quickly discovers the reason behind a ‘special potion’ her mother has to take each day. With her mother’s potion supplies depleted Amber must travel deep into the wandering woods, to seek out the domain of her evil aunt Belladonna in the hope of finding supplies to replenish her mother’s potion stock. The question hangs throughout the tale; will Amber ever return from her quest? And if she does, can she save her mother?

I would love to say that it is the youngster in me that enjoys fairy tales, but I think the tales appeal just as much to me now as they ever did, and I don’t attribute this to any feeling of childishness. Fairy tales are for everyone, they are in their very nature timeless, and can appeal to the most innocent and wise of minds alike. I so enjoyed reading Amber, and felt compelled afterwards to revisit some of my childhood favourites. I dusted off my old copy of Hans Christian Andersen’s Fairy Tales and spent a few happy hours immersed in its pages once more.

The Wandering Woods are the perfect setting for a fairy tale, a tangled expanse of plant and animal life, buzzing with magic which seems to bring the setting to life. Woods have long been considered to be the dwelling place of fairies, sprites and other mythical creatures. Even the famous Cottingley fairy pictures were taken inside the woods. 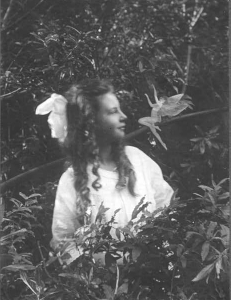 The story which develops out of this setting is intricate and enchanting, reflecting all the characteristics of a traditional, well loved fairy story, although it is rather more child friendly than many of the darker, more sinister traditional tales (I’m looking at you brothers Grimm). Amber embarks on a quest, the innocence of her mind unable to grasp the horror which may await her outside of her mother’s domain. With a determined heart and her trusty wooden sword she sets out on a journey which could well be her last. Along the way, she meets many a friend and foe, and encounters magical settings and creatures which delight and amaze her, as well as darkness so black as to make an ogre quake.

Amber serves as a tale of the battle between good and evil, with the message that there is good to be found in the most unlikely places. Amber’s evil, wicked Aunt Belladonna serves as the image of a character absorbed by darkness, but with a small slither of light still within her. If you look closely, Belladonna is not so unlike a good creature; within her Amber sees ‘a face not unlike [her] mother’s’ but with eyes reflecting ‘only malice’.

Gibson writes with the most beautiful, flowing language, which may at first seem a little too deep for a young child. However, given that it is predominately written as story for parents to read for their children (and Gibson originally wrote the story as a bedtime story for his own children), this does not seem to be a problem at all. In fact, intricate language is a great way to introduce a bigger vocabulary to a young child. As Einstein said ‘If you want your children to be intelligent, read them fairy tales. If you want them to be more intelligent, read them more fairy tales.’ Older fairytales are full of long, flowing passages describing the leaves of a forest or the song of a nightingale and Gibson’s is no different.

Amy Sayer’s artwork adds another wonderful dimension to Gibson’s work, and an important one at that; whoever heard of a children’s book without illustrations? The artwork is truly stunning, and presented in such a way as to still allow for the imagination of a child to run wild. The characteristics of Amber, Blossom and Belladonna are given, and yet only their silhouettes are shown. Children can create their own image of Amber for themselves, while still enjoying the artwork. 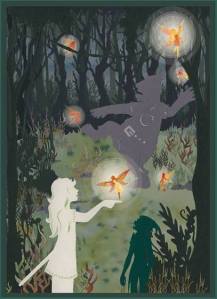 With Amber, Gibson has created a beautiful tale for parents and children alike, which has in turn been stunningly illustrated by Sayers. The style of illustration is perfect for a fairytale – and the cover has just the right amount of allure. The language is beautiful and poetic, slowing freely from chapter to chapter and drawing the reader deep into the Wandering Woods. I would highly recommend fans of fairy tales give Gibson a chance; you’ll be eagerly anticipating the next instalment.

I was sent a free copy of Amber by the author in exchange for an honest review.