Skip to content
Home“How talented was death. How many expressions and manipulations of hand, face, body, no two alike.” ― Ray Bradbury, 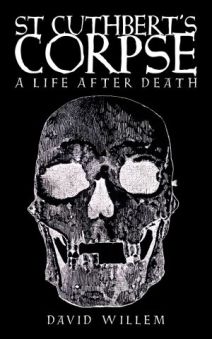 David Willem obtained a Bachelor’s degree in literary studies at the University of Portsmouth before beginning a career as a freelance writer and editor. Throughout this time he worked as a correspondent for several magazines and newspapers including the Guardian and the Times.  In 2002 Willem published his first book, Kicking: Following the Fans to the Orient, a fascinating look at relations between the English and the Japanese during the 2002 World Cup. Willem’s second book, St Cuthbert’s Corpse: A life after death was published by Sacristy Press in 2013.

The remains of St Cuthbert are said to reside inside Durham Cathedral. As with many saints, St Cuthbert became somewhat more famous after his death, which occurred in the year 687. The tale of St Cuthbert’s journey to its final resting place has much local fame, with several tales having emerged as to why Cuthbert may have ended up in Durham including the well-known ‘Dun Cow’ story. Perhaps most significant, however, are the stories surrounding St Cuthbert’s imperishable corpse. Thirteen hundred years after his death and the miracle of St Cuthbert’s seemingly incorrupt corpse still causes much fascination amongst historians, and theologians alike, it is even said to have inspired the construction of Durham Cathedral. Since St Cuthbert’s death his remains has been excavated on no less than six separate occasions. In St Cuthbert’s Corpse: A life after death David Willem, for the first time, amalgamates the historical accounts of each opening into one concise edition – providing the reader with a captivating glimpse into the life after death of St Cuthbert, from 687 to the present day.

Before reading St Cuthbert’s Corpse I was completely unfamiliar with this part of history, and will confess to having never even heard of St Cuthbert. While I am a massive fan of historical fiction, I don’t tend to read many historical texts, but was taken in by the striking front cover of the book, and its intriguing synopsis on the Sacristy website. I was not to be disappointed when I received the book, which is short enough to be read in a single sitting and offers a meticulously researched and crisp overview of the entire history of St Cuthbert’s corpse.

Willem has divided the book in several chapters, each tracing particular stage in the history of the corpse, with a short title and subtext explaining the era and time elapsed since St Cuthbert’s passing. Each chapter gives the reader not only the story of each excavation, but also a glimpse of each moment in history and an insight into the significance that the remains held to those alive at the time. Through this Willem has created an incredibly accessible piece, which is easily navigable by even the most budding historian.

The most enjoyable and perhaps frustrating part of the book is that there is no ending, and as a reader, you know that there will never be an ending. The question always remains as to the validity of the reports on the incorruptibility of St Cuthbert’s corpse. The accounts that exist of the times when the corpse was excavated follow on perfectly on from one another, but it is impossible to truly know the answer. I wonder perhaps if he will be excavated again one day, or if he has really been laid to rest this time?

Overall, I thoroughly enjoyed reading St Cuthbert’s Corpse, and took away knowledge of, what was to me, an entirely new piece of history, as well as a desire to know more. I would recommend the book to anyone interested in theological history, and to those unfamiliar with St Cuthbert’s story.

Many thanks to Sacristy Press for sending me a free review copy of the publication.